Hydrology refers to the study of water and how it impacts the environment. Precipitation, groundwater, runoff, lakes, and streams: all of these 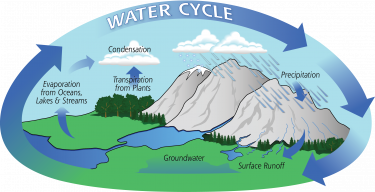 seemingly individual components interact with one another to form a dynamic system known as the hydrologic or water cycle. Understanding these interactions as well as how each of these aspects can affect the local ecology and lake water quality is one of the key management strategies of the City’s Natural Resources Division. The following are interactive charts updated with monthly rainfall, lake level, and groundwater data. Below are also sections that provide some background information on these metrics and the terminology you’ll find in the charts.

When water from the atmosphere makes its way to the Earth in various forms (e.g. rain, snow, sleet, hail), it is referred to as precipitation. Locally, the predominant form we see is rainfall. Due to our geographic location at the top of a ridge, Winter Haven is a purely rainfall driven hydrologic system—meaning that the source of all surface and groundwater is derived from rain as opposed to water flow from upstream. In fact, Winter Haven’s lakes act as part of the headwaters for the Peace River which flows to the Gulf of Mexico via Charlotte Harbor. Water is lost from the area either as evapotranspiration (evaporation + plant uptake) or flow to downstream areas. This net gain or loss of water is important in tracking our drinking water supply and for predicting drought conditions.

Gross monthly rainfall depicts the total amount of rainfall that falls each month. These monthly levels are plotted against the long-term average (dotted line) and the 25th to 75th percentile range (shaded area) for that month. This interquartile range represents the normal range of rainfall fluctuations in the given month.

Year-to-Date (YTD) Annual Total is a tally of all the gross rainfall that has fallen in the selected year to that point. Once rainfall data has been collected for the entire 12 months, we can see where the annual total sits in relation to the long-term annual average (dotted line) which is 51.6 inches.

Monthly Net Rainfall is a chart that depicts total gross rainfall and total evapotranspiration (ET) in a given month. By subtracting gross rainfall from ET, we get total net rainfall. Since ET can be higher than gross rainfall, net values can be negative numbers. Negative net rainfall means the Winter Haven area has lost water during that month. Net rainfall is typically negative in the dry season and positive during the wet season.

Year-to-Date (YTD) Net Rainfall is similar to the YTD Annual Rainfall chart in that it is a tally of total net rainfall for a given year. If the YTD Net is positive, then the Winter Haven area has gained water for that year–and vice versa if it is negative.

Also known as lake stage or surface elevation, surface level represents the height of a lakes water level above sea level. As the Chain of Lakes City, Winter Haven prides itself on its numerous waterbodies which serve as integral social, economic, and ecological resources for the community. When the level of a lake fluctuates it can impact things like navigation through canals, the use of docks and boat ramps, and wetland connectivity—which can also affect water quality. Rainfall and groundwater conditions play an enormous role in lake stage fluctuations. Lake levels are typically replenished during Florida’s wet season (June – October) and will decline during the dry season (November – May). Partnering with the Lakes Region Lakes Management District and the Southwest Florida Water Management District, the City compiles regular staff gauge readings for many of the public lakes in the area to track fluctuations and compare with historic levels.

Lake Surface Level is a hydrograph or chart depicting monthly lake level readings for a specific lake or group of lakes (if they are at the same level). The hydrograph shows lake levels in relation to the long-term average (dotted line) as well as the 25th to 75th percentile range (shaded area). Also plotted are monthly gross rainfall values to depict how changes in rainfall affect surface levels. You can select a specific lake or group using the drop-down menu at the upper-right of the graph; and you can select a specific time range using the year slider at the top.

There are two major types of groundwater with respect to Floridian geology: the water table and the confined aquifer–known as the Upper Floridan Aquifer. The surficial aquifer or water table is the level of water trapped in porous space in the ground directly beneath the surface. Whereas, the confined aquifer is much deeper and is typically separated from the surficial aquifer by an impenetrable confining layer—such as clay. The level of the water table generally fluctuates rapidly and is tied closely with atmospheric conditions such as temperature, humidity, and rainfall. The confined aquifer, on the other hand, can only exchange water with the surface through breaks in the confining layer—meaning that its level is much more stable. Both types of groundwater are influenced by precipitation as well as how much water is extracted for municipal use. Groundwater also plays a large role in lake surface level fluctuations as it can act as either a sink or a source depending on the current surficial and confined aquifer levels.

Upper Floridan Aquifer Level is a chart of the monthly confined aquifer level as determined through the Southwest Florida Water Management District sensor in downtown Winter Haven. This hydrograph is plotted against the long-term average (dotted line) and 25th to 75th percentile range (shaded area). Monthly gross rainfall is also plotted to show how changes in rainfall affect groundwater level. The year slider at the top can be used to adjust the displayed time period.