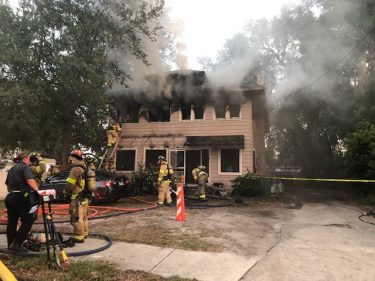 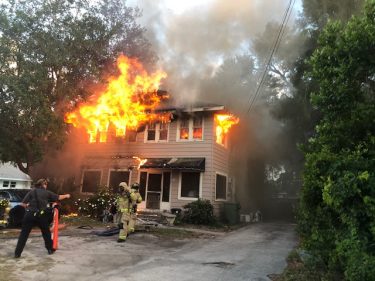 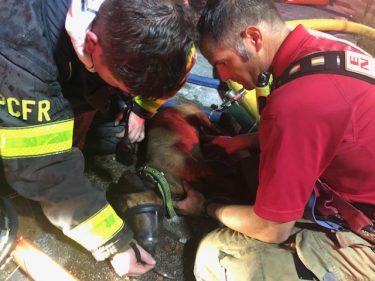 On 5-13-20 at approximately 7:50 p.m., a 9-1-1 call was received regarding a two-story structure that was on fire. The structure located at 540 Ave. A. NE in Winter Haven is an older home that has been converted into individual apartments. There were no injuries to the residents or firefighters. One dog needed oxygen after suffering minor smoke inhalation.
One of the upstairs tenants started to smell smoke and upon searching, located one room where a mattress was on fire. The tenant in that specific room was away at work. Immediately, Christopher Klimczak, Sr. attempted to extinguish the flames, but the fire continued to spread.  Klimczak started going to other tenants making them aware of the fire and told them all to seek safety immediately. Klimczak also assisted in rescuing a dog with her puppies. A total of 14 adults and children live in the multi-unit building.
When Winter Haven Firefighters arrived, they saw heavy black smoke and flames coming from upstairs. The power lines were still live at the time.
Approximately 45 minutes later, firefighters had the flames under control and continued to monitor the structure for any hotspots. All residents were able to exit safely including a dog and puppies. The mother dog had minor smoke inhalation and is expected to fully recover.
The Red Cross responded to assist the residents with accommodations.
Fire investigators determined the fire was accidental appearing to have started in a power strip that was plugged in.