Kitchen fire at Spring Haven Retirement displaces residents. There were no injuries to residents, staff or firefighters. 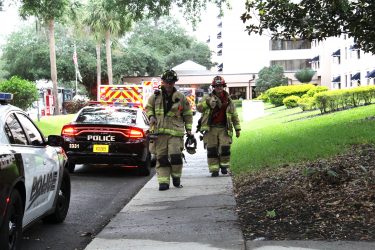 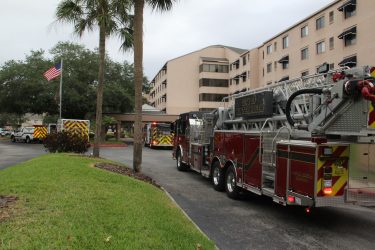 On April 17, 2020 at approximately 7:22 a.m., the Winter Haven Fire Department responded to a kitchen fire at Spring Haven Retirement, located at 1225 Havendale Blvd. NW in Winter Haven. When members arrived they located the initial apartment where the fire started on the third floor and determined that the sprinkler system had successfully extinguished the fire. The location of the apartment is in the independent living five-story building of the complex. The resident in the unit, an 87 year-old female, had already been evacuated from the room after Spring Haven staff member Jackie Rowell responded immediately to the alarm and entered the room to assist the resident and her cat to safety.
Six fire engines with 19 members from the Winter Haven Fire Department responded to evacuate residents from the building. Moving room-to-room, fire personnel safely escorted residents outside and made certain there were no units that showed signs of smoke or fire. Fans were brought in to clear the haze from the building and an evaluation of all units determined that at least seven units below the third floor residence suffered significant water damage.
At 8:35 a.m., residents of units that were not affected were allowed to start returning to their residence. Those residents who had units with damage are being relocated to vacant units on Spring Haven property.
“The quick response of our firefighters ensured that all residents in the building were evacuated quickly and without any injuries,” said Public Safety Director Charlie Bird. “The coordination of all involved to include the temporary relocation of residents by the facility is what makes our community so great.”