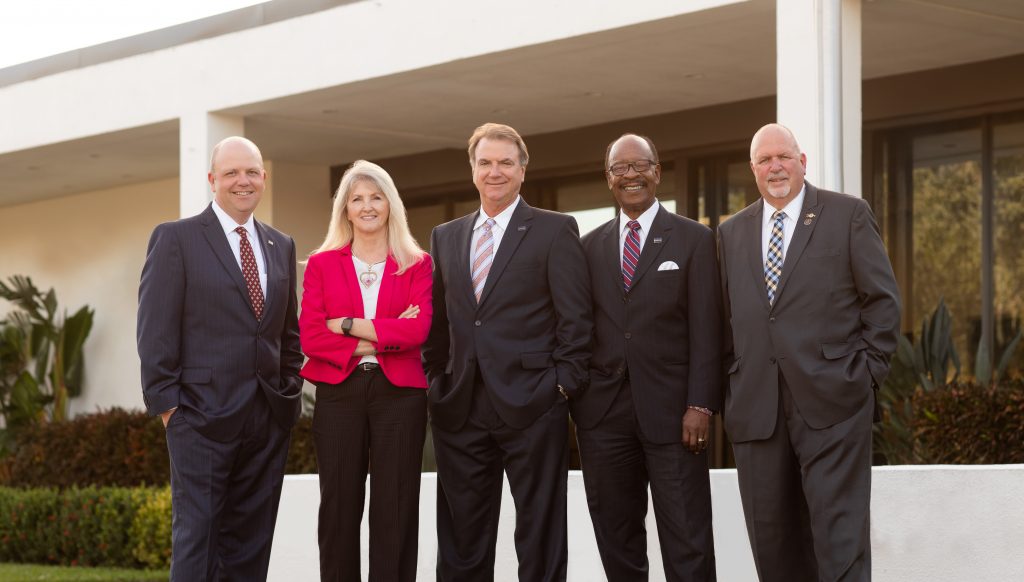 Winter Haven has five City Commissioners, which includes an appointed Mayor and Mayor Pro Tem. Commission meetings are generally held the second and fourth Mondays of each month at 6:00 p.m. in the John Fuller Auditorium in City Hall, but are hosting meetings via the ZOOM virtual platform and in-person at John H. Fuller Auditorium in City Hall.  Agenda Review Session Meetings to review the Regular City Commission Meeting agenda are typically held the Wednesday prior to the Regular City Commission Meetings. For more information on ways to attend the meeting or provide comments, please contact the City Clerk’s Office at 863-291-5600.

Mayor Bradley T. Dantzler was elected to Seat #4 in a special election in spring 2013 and re-elected in 2013, 2017, and 2021. Brad served as Mayor in 2016, 2018, 2019, 2020, 2021, and will be serving now in 2022. A Winter Haven native, Brad is a third generation Winter Haven City Commissioner. He graduated Winter Haven High School in 1980, University of Florida in 1985 and earned a Masters of Business Administration from Nova Southeastern University in 1991. He has been a Senior Vice President and Financial Advisor at Raymond James & Associates for 26 years. He and his wife, Susan, have two grown sons, two granddaughters, and one grandson.

Brad is a board member of the Community Redevelopment Agency (CRA) Board and serves as the Commission liaison to:

Nat is a board member of the Community Redevelopment Agency (CRA) Board and serves as the Commission liaison to:

He also serves on the:

Commissioner Lucretia Tracy Mercer, was elected to Seat #1 in 2019. Prior to being elected to the City Commission, Tracy was a Commissioner for the Lake Region Lakes Management District.  She holds a Bachelor of Arts degree in Business Operations from Warner University and an MBA from Webster University in Business Administration. She is a member and past President of the Kiwanis Club of Winter Haven. She is a past president of Keep Winter Haven Clean and Beautiful and a former member of the Garden Club.  Tracy has one grown son, one granddaughter and one great-grandson.

Tracy is a board member of the Community Redevelopment Agency (CRA) Board and serves as the Commission liaison to:

Commissioner William Brian Yates was elected to Seat #3 in 2019. A Winter Haven native and 7th generation Floridian, Brian graduated from Winter Haven High School, attended Polk State College and graduated from the Florida School of Banking. Brian is a Senior Vice President and the Director of Small Business Lending at Citizens Bank and Trust. He is a member and past President of the Rotary Club of Winter Haven and  past member of the Florence Villa Community Redevelopment Agency (CRA) Advisory Committee. Brian and his wife Samantha have two sons.

Brian is a board member of the Community Redevelopment Agency (CRA) Board and serves as the Commission liaison to:

Commissioner James H. “J.P.” Powell has served on the Winter Haven City Commission from 2007 to January 2016, re-elected to Seat #5 in November 2017 and then in November 2021. Commissioner Powell served as Mayor 2011, 2012 and 2013. He also served as Mayor Pro Tem in 2009 and 2010.  An Ohio native, J.P. attended Malone College in Canton, Ohio, and the University of Akron, Ohio. He is employed as a Manager at Ott-Laughlin Funeral Home and Glen Abbey Memorial Gardens. J.P. is also a past member and former chair of the Winter Haven Planning Commission, Code Enforcement Board and the Florence Villa CRA Advisory Committee. He is a member and Past President of the Rotary Club of Winter Haven and the Winter Haven Optimist Club. Members of First Presbyterian Church, JP and his wife, Kim Traviss Powell, have one grown son Traviss.

J.P. is a board member of the Community Redevelopment Agency (CRA) Board and serves as the Commission liaison to: