Due to the effects of localized rainfall, data from multiple sources across the greater Winter Haven area is compiled to calculate an average value for gross rainfall. During the month of September, the City received 4.25 inches. While this amount is below the average for this month (6.74 in.) when compared with historic records that date back to 1915, it still falls within the normal range; see Figure 1. It should be noted that September’s standard deviation for rainfall in this area is higher than in any other month—most likely due to the unpredictable nature of tropical cyclones during the latter part of Florida’s hurricane season. Since September marks the beginning of Fall and the Florida dry season, rainfall can vary wildly depending on the presence of a hurricane or tropical storm. In fact, the City record for monthly total rainfall (15.97 in.) occurred in September of 2004 which was during one of the state’s most active hurricane seasons in recent times. 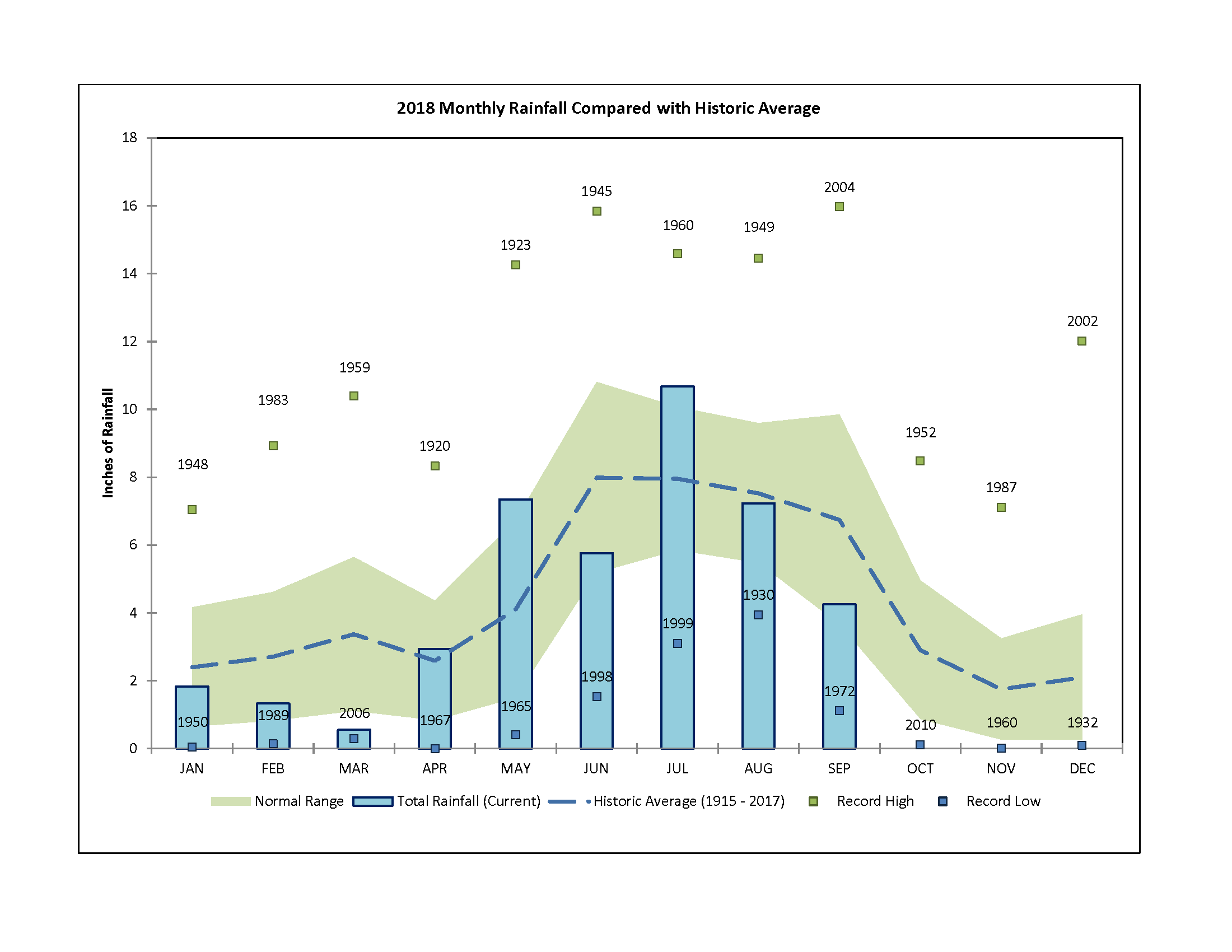 As a purely rainfall driven system, the abundance or lack of precipitation carries significant hydrological impacts for the Winter Haven area. Understanding when there is a surplus or deficit of rainfall is important for matters of drinking water conservation as well as for environmental factors like the potential for wildfire. In order calculate the general net gain or loss of water for the area, evapotranspiration (water loss due to evaporation & plant uptake) is subtracted from the gross rainfall total. For the month of September, Winter Haven essentially broke even, albeit with a slight rainfall deficit of 0.32 inches. However, due to the significant surpluses received during July and August, the net amount for the year-to-date still remains over 4 inches. Figure 2 demonstrates how the net rainfall has fluctuated this year. 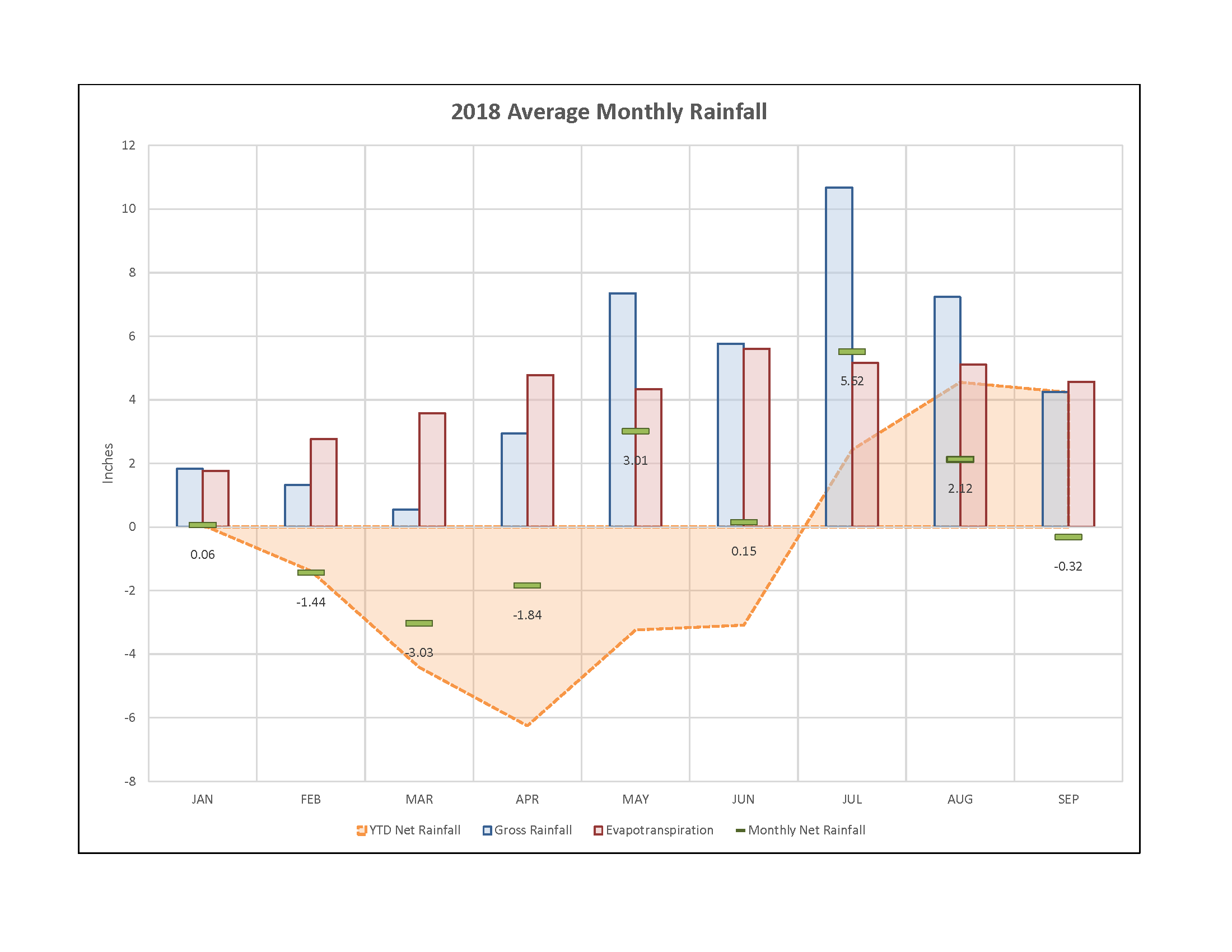 The monthly average surface level for the Southern Chain of Lakes decreased slightly from 132.26 ft above sea level in August to 132.01 ft in September. Referring to the historic average surface level plot in Figure 3, we can see that September typically marks the end of the rainy season when the lakes are at their highest levels during the year; yet, it appears the lake levels peaked in August this year. Although the average lake stage has dropped since last month, it is still slightly above the high end of the normal range. As lake levels begin to decline in the dry season, there is extra water volume for aquifer recharge which helps buffer against rapid change in lake stage. This means the lakes are in a good position from a water conservation standpoint. 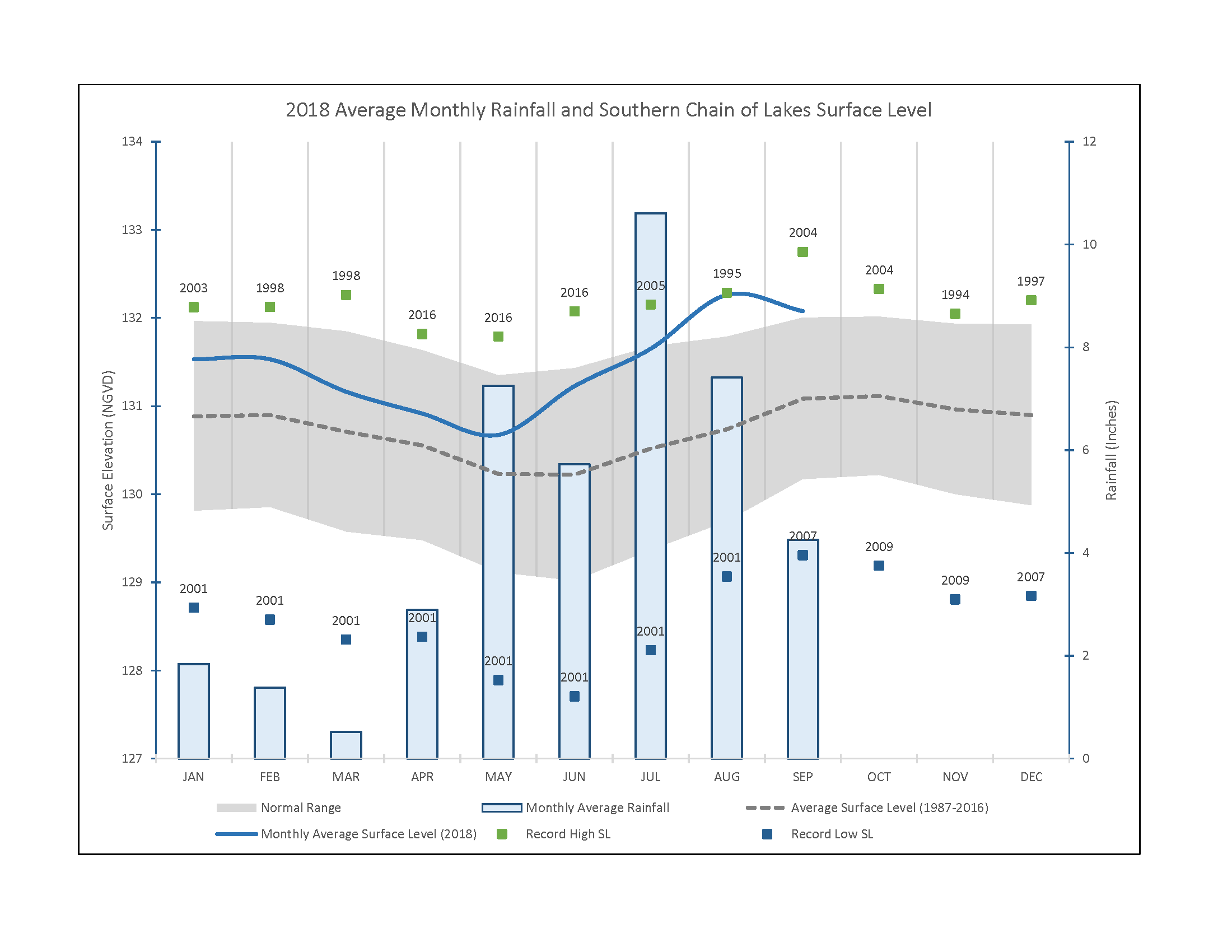