An alert citizen helps track down a suspect in a vehicle burglary, but other items found were troubling.

On July 1, 2018 at approximately 3:20 p.m., an alert citizen saw 34 year-old Melinda Ann Pugh (Woodstock Ave., Lakeland) inside of a van at Big Tom’s Diner on Havendale Blvd. The witness personally knew the owner of the van and that she was inside eating at the time.

The witness saw Pugh leave the parking area and head towards Walgreens a couple of blocks away. The witness followed Pugh and called police. A bag that Pugh was carrying was located on the property of T-Mobile, which is next to Walgreens. The bag was identified by the witness as the same bag Pugh had been carrying while she was inside of the van and when she walked from the parking lot.

Ultimately Pugh was located inside of Walgreens and taken into custody.

Now for the interesting part – what was found inside of the bag.  A couple of items that were positively identified from the victim’s van at Big Tom’s Diner, but also multiple door keys, a door handle and accessories that all had Spring Haven Retirement Center tags on them.

Officers made contact with Spring Haven Retirement Center management and found that Pugh had signed herself in earlier in the day. She indicated she was there to see a resident, however that resident moved from the facility more than a month ago. It is still unclear how Pugh obtained the Spring Haven property.

During the ride to the Police Department, Pugh slipped one of her hands from the handcuffs and when officers attempted to remove her from the vehicle, she started pulling away. She was removed from the vehicle and was told to stop resisting. To which she replied, “You want to see resisting?”  She then lunged towards officers and struck one in the chest. She continued to tense and attempt to pull away, but was ultimate led into the holding cell with additional effort.

Pugh was booked into the Polk County Jail and charged with Burglary of an Unoccupied Vehicle (F3), Resisting Officer with Violence (F3), Battery on a Law Enforcement Officer (F3) and Petit Theft (M2).

“This is a perfect scenario where an alert citizen gets all of the right information for our officers to make an arrest,” said Chief Charlie Bird. “Not only was the property returned to the rightful owner, but it is obvious that Pugh had the ability to victimize residents at Spring Haven Retirement enter as well.” 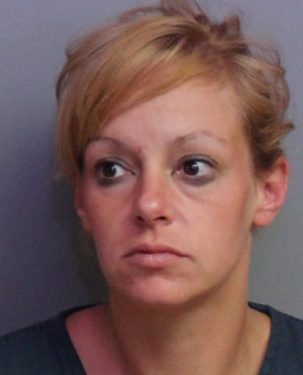