A man is facing serious charges after citizens saw him walking along the overpass on Hwy 17 with what appeared to be a rifle. It was later determined to be a pellet gun.
On 4-7-21 at approximately 3:10 p.m, officers responded to the area of Hwy 17 and Cypress Gardens Blvd. in reference to a man walking and pointing what appeared to be a rifle in the air and in various directions. As officers were responding, they located a man matching the description in the area of Ave. R SW with what appeared to be a rifle in his hands. Officers commanded him to stop, but upon seeing officers, 24 year-old Andrew Bradley (LKA-homeless) ran into an area with dense vegetation. Multiple officers ran after him and were able to catch Bradley and take him into custody after he dropped the weapon.
As Bradley was being detained, another call came into dispatch from workers at Tire Choice, located at the corner of Hwy 17 and Ave. R SW. Two workers reported that they were working in one of the garage bays when a man pointed a rifle at them from approximately 200 yards away on the south side of the business. They stated the man then began running towards them pointing the weapon straight at them. Fearing for their lives, they both fled to the rear of the building. Neither man was injured.
Officers conducted a show-up and one of the victims was able to identify Bradley as the man who ran towards him pointing the rifle at him and his co-worker. Officers searched Bradley upon his arrest and also found a needle with a substance that tested positive for methamphetamine. The weapon Bradley pointed was determined to be a pellet gun.

Bradley was booked into the Polk County Jail on the following charges: 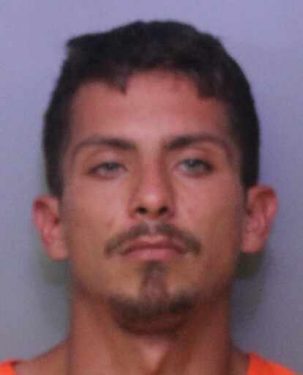