On 8-5-19 at approximately 10:30 p.m., Winter Haven Police received information that a vehicle with convicted felon 22 year-old Jaquel Fleming (Bentley Oaks Blvd, Auburndale, FL) had fled an earlier traffic stop that was attempted by the Auburndale Police Department. Officers had been made aware that the occupant was Fleming, a convicted felon, and had a warrant for his arrest on Aggravated Battery and Armed Burglary charges from Auburndale.

Winter Haven officers spotted the black Nissan Juke traveling at a high rate of speed entering the city limits of Winter Haven at Hwy 92 and Hwy 17. Officers kept a safe distance while keeping a visual on the vehicle as he traveled south on Hwy 17 with speeds exceeding 90 mph. As the vehicle approached the intersection of Havendale Blvd. and Hwy 17, the light was red for southbound traffic. Fleming jumped the curb driving erratically around vehicles and ran the red light continuing south on Hwy 17. There were no crashes at this location.

Fleming then turned right at Ave. L SW, traveled down 8th St and then to Lake Howard Dr., when numerous officers in the area activated emergency lights in another attempt to initiate the traffic stop. At this point, Fleming turned off his headlights while continuing to travel at a high rate of speed through the intersection of Ave. D and Hwy 17 and on through the City. With the assistance of the Polk County Sheriff’s Officer air unit, the pilot continued to inform officers on the ground of where Fleming was traveling and also reported the traffic conditions ahead. Fleming continued speeding through red lights and stop signs where he struck a vehicle at 6th St NW and Central Ave. There was minor damage and no injuries to the other driver. Fleming then continued driving erratically throughout the City until he crashed into a fence and a fire hydrant at 3rd St NE and Ave Q NE.

Fleming, the sole occupant of the car, ran from the vehicle ignoring all commands to stop. Inside of the vehicle on the driver’s seat officers found a loaded Smith and Wesson 40 caliber handgun.

A perimeter was set up with Winter Haven and the Polk County Sheriff’s Office and with the assistance of K-9 Bane and his partner Officer Doyle, Fleming was located inside of another vehicle at a residence located on 2nd St NE. Fleming was then taken into custody without further incident.

“This is a perfect example of how cooperation between agencies helped to capture the bad guy,” said Public Safety Director and Police Chief Charlie Bird. “With our agencies being on the same radio channel, there was no time lost trying to decipher where the vehicle was. Auburndale, PCSO and our officers were all communicating together, which was paramount to the successful outcome.” 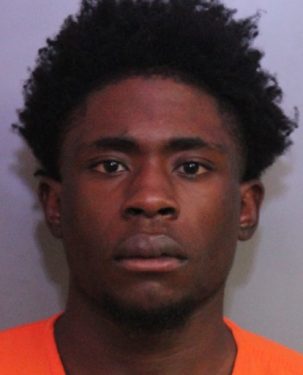