Firing A Gun In The Air Is Never A Good Idea

A Winter Haven man is back behind bars after he fired a handgun five feet away from a child trying to separate two dogs that were fighting.

On July 29, 2021 at approximately 9 a.m., a young girl was walking a dog along Ave. L SE in Winter Haven. Another dog charged towards the dog on the leash and attacked the dog. The child started screaming and attempted to pull the leash to get the dog away to no avail.

A neighbor came out in an attempt to help when 28 year-old Taylor Tanner, who was five feet away from the girl, pulled a handgun from his pocket and fired the gun into the air. Tanner stated it was in an attempt to separate the dogs, which did not work.

Ultimately the dogs did separate and upon officers’ arrival, Tanner was taken into custody. It is unknown at this time the extent of either dogs’ injuries. Neither the child nor the neighbor were injured.

Tanner was also found to have a warrant for Violation of Probation for possession of drug paraphernalia.

“We cannot express enough how dangerous it is to fire a weapon in the air especially in close proximity to other people,” said Chief David Brannan. “The old adage, ‘What goes up must come down’ is absolutely true and that bullet could easily have hit someone and caused serious injury or worse.” 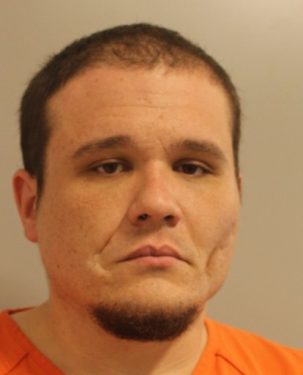