A 27 year-old Haines City High School teacher has been arrested after sexually explicit conversations and photos were sent to a 15 year-old Texas boy.

Back on 9-18-17, 27 year-old Robin Dunlap (24th St NW, Winter Haven) voluntarily came to the Winter Haven Police Department to turn herself in for sending nude photos to a 15 year-old boy in Texas. She stated that she sent the nude photos before she learned of his real age. The boy had represented himself as a 19 year-old throughout the conversations the two had over Xbox One. The conversations moved to communicating through Kik via text and video chat using their respective cell phones. The mother of the victim checked her son’s phone and realizing what was happening contacted Dunlap through the same phone and informed her that her son was 15 years-old, not 19. That’s when Dunlap chose to turn herself in. But it didn’t stop there.

Dunlap gave investigators consent to look at her phones she had in her possession and a conversation was found that started on 11-26-17 and continued through 12-11-17. The conversation slowly progressed to extremely vulgar with sexually explicit language.

Based on the fact that Dunlap knew the age of the victim, yet continued to have sexually explicit conversations with the 15 year-old, Dunlap was taken into custody and booked into the Polk County Jail on charges of Transmitting Material Harmful to Minor (F.S.S. 847.0138) F3 and Using 2-way Communication Device to Commit a Felon (F.S.S. 934.215) F3.

“There is absolutely no excuse for an adult – especially a high school teacher – to continue sexually explicit conversations with a 15 year-old long after his real age is revealed,” said Chief Charlie Bird. “The vulnerable age of this victim and the fact that this woman took advantage of him for her own personal needs is inexcusable.” 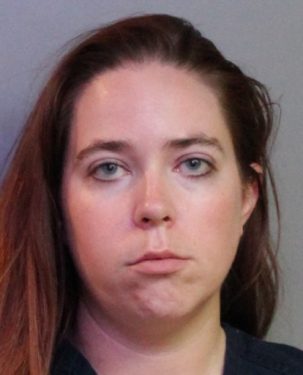