A kerfuffle at the Walmart Liquor Store ends with a traffic crash and charges to include aggravated battery, DUI and driving without a license.

On 6-14-18 at approximately 9:48 p.m., our victim, 31 year-old Christopher Fields entered the liquor store at Walmart (7450 Cypress Gardens Blvd) in Winter Haven. Shortly after, 35 year-old Frank Alan Caley of Winter Haven  came into the store and approached Fields. Caley started yelling at Fields for no reason. (Fields stated that he didn’t know Caley and had never had any interaction with him.)

Fields continued to back away from Fields and tell him to leave him alone when Caley picked up two large liquor battles and started swinging them towards Fields. Caley continued to swing the bottles around and would hold them up like he was going to hit Fields. Our victim continued to try to get away from Caley telling him to leave him alone. Fields ended up backed into a corner when Caley hit him across the mouth with one of the bottles knocking Fields to the ground where he briefly lost consciousness. As associates tried to break up the incident, Caley threw the second bottle onto the floor and left the store.

Fields was taken to Winter Haven Hospital and treated for wounds to his mouth. He is expected to make a full recovery.

Caley was seen going towards the R.V. Park directly behind Walmart. Another customer in the store told officers that they possibly knew who the aggressor was and ultimately he was identified as Caley.

Officers went to his residence at the R.V. Park, but were told by a neighbor that he had just left in his maroon SUV at a high rate of speed. Shortly after, an off-duty Auburndale police officer witnessed a crash at Cypress Gardens Blvd and Hwy 27. A Polk County Sheriff’s Deputy arrived on scene to find Caley out of his vehicle pacing around moving into the flow of traffic. Caley continued to disregard lawful commands to be still and then lit a cigarette, once again against commands from the deputy.

Caley was arrested at the scene of the crash by the Polk County deputy on charges of DUI, Resisting Officer without Violence and No Valid Driver’s License (not to mention a host of traffic violations). Caley was also charged by Winter Haven Police for Aggravated Battery Causing Bodily Harm (F2) and Assault with Intent to Commit a Felony (F3). 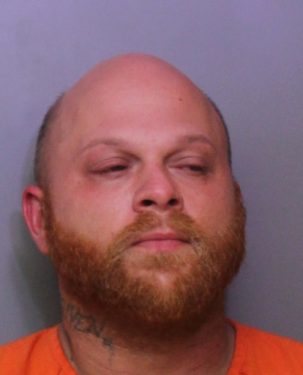