We interrupt this focus on Dorian to highlight the great work of Winter Haven officers as they continue to patrol, protect and serve the citizens.
In the early morning hours of August 31, 2019, officers were patrolling businesses along Cypress Gardens Blvd. SE ensuring there are no shenanigans occurring. Alas, 29 year-old Conway Chaney was found creeping around the back of Starbucks. Upon seeing officers, Chaney quickly turned the corner and swiftly walked west through the parking lot of Discount Tire on Roosevelt Dr.
Officers gave not one, not two, but five verbal commands for Chaney to stop. Finally, he either got the cotton out of his ears or made the right decision and he stopped, raising his hands as officers approached. He was carrying two duffel bags and a black and silver hard-sided case. Officers saw him drop the items in some bushes and he started to separate himself from where he dropped the items.
Due to the business being closed and Chaney’s suspicious presence, Chaney was asked to sit on the sidewalk to officers could figure out what he was doing. Chaney claimed he had been at the nearby Quality Inn with two other people and decided he wanted to leave. When asked about the contents of the duffel bags, Chaney said they weren’t his. Asked if the bags could be searched, Chaney replied, “I don’t care.” He told officers there would be some of his belongings in the bags. Also, inside of the hard-sided case, some of his tattoo supplies could be found.
Inside of the duffel bags officers located hypodermic needles and clothing. In the silver hard-sided case was a tattooing device, needles, ink and a money clip with $3998. Oh, not to mention two clear bags of Methamphetamine totaling 67.7 grams.
As you can imagine, officers were quick to take Chaney into custody even though he insisted the stuff wasn’t his. He was booked into the Polk County Jail on one count each of Trafficking Methamphetamine (F.S.S. 893.135(1)(F), F-1; Loitering and Prowling, M-2; and Possession of Drug Paraphernalia, M-1. 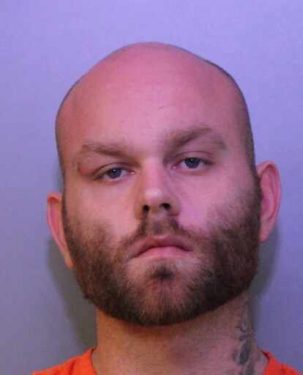