A 47 year-old Lake Wales woman sits behind bars after she attempted to sell a stolen ring to the jewelry store where the ring was stolen from in a July burglary. Three others were sold to a Lake Wales jewelry store and found to be from the original burglary. 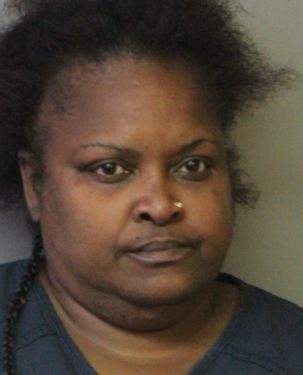 On 9-28-2020, at approximately 10:30 a.m., Alice Lavern Henry (DOB 11-21-72, 302 Dr. ML King Jr Blvd., Lake Wales FL) went to Griner’s Jewelry, located at 195 Ave A NW in Winter Haven to sell a ring. She had called the store earlier asking if they would like to buy the Simon G. ring. The store clerk, knowing that there had been a burglary at the store in July where multiple Simon G. rings were stolen, was eager to see what Ms. Henry had to offer.
Striking up a casual conversation about the ring, the clerk asked where Henry obtained the ring. She said she had found it while treasure hunting with a metal detector on a beach in the panhandle. Upon inspection of the ring, there were no obvious signs of damage, sand or any indicators that would lead someone to believe the ring had been lost on the beach. The value of the ring – $1,059.
Another clerk in the store called police while Henry was in the store. Once the officer and a detective arrived, Henry again repeated her story that she found the ring while using a metal detector on a beach in the panhandle. She claimed that her daughter, who lives in Panama City, had an emergency and she drove up to be with her. Along the way, Henry encountered a friend of hers who lives in Avon Park and guess what the friend had in the car yes, a metal detector. Henry decided that while tending to her daughter’s emergency, surely she can find some hidden treasures along the beach. (She didn’t locate her daughter at home so she went to the beach.) We won’t torture you any longer.
Henry left Griner’s without the money or the ring.
Further investigation revealed that Henry had sold three other Simon G. rings (also found to belong to Griner’s) and a single earring (not belonging to Griner’s) on different September dates at Mayer’s Jewelry in Lake Wales. She had attempted to sell the fourth ring to Mayer’s on September 24, however they didn’t conduct the transaction and sent her on her way. Since there are only a few locations that have Simon G. jewelry, she learned that Griner’s was one and initiated the call. A warrant for Henry’s arrest was obtained by Winter Haven detectives and on October 4, Henry was located at her residence and taken into custody without incident. She was interviewed by Winter Haven and Lake Wales detectives. When asked where she obtained the jewelry, she told them she found all of the jewelry on the ground by dumpsters in the apartment complex where she lives. The investigation continues into the original burglary.
Winter Haven Police charged Henry with one count of Grand Theft < $5,000 (F3) and one count of Dealing in Stolen Property F2). Lake Wales dropped charges at the jail for one count of Grand Theft < $5,000 (F3) and three counts of Dealing in Stolen Property (F2).