Twenty year-old Charles Kennedy (Amesbury Dr., Auburndale) is facing felony charges after he struck a pedestrian on Saturday in the intersection of 6th St NW and Ave. M NW in Winter Haven.
On 6/22/19 at approximately 9:05 p.m., 62 year-old Robert Marshall of Winter Haven was in the crosswalk walking west at 6th St NW and Ave. M NW when the light changed to green for 6th St traffic.
Kennedy, who was riding a green 2015 Kawasaki Ninja motorcycle heading north on 6th St., entered the crosswalk striking Marshall and knocking him to the ground. Marshall suffered significant injuries, though they were non-life-threatening. At this time, Marshall remains in the hospital in serious, but stable condition.
Kennedy did not stop and according to witnesses sped off continuing northbound. Parts of the motorcycle were left behind including a mirror and two pieces of a fairing. The serial number from the mirror matched a 2013-2016 Kawasaki Ninja motorcycle.
On Sunday, 6/23/19 at approximately 6:45 p.m., a green Kawasaki Ninja was located behind the Just Move Gym in Spring Lake Square. The motorcycle had damage and no tag attached. The VIN number came back as registered to Charles Kennedy of Auburndale.
Approximately three hours later, Charles Kennedy reported his 2015 green Kawasaki Ninja stolen to Auburndale Police. Winter Haven officers went to Kennedy’s house to interview him regarding the found motorcycle. Kennedy told officers he last saw his motorcycle on 6/22/19 in front of his residence with the key in the ignition.
Officers were able to determine that Kennedy had gone to his girlfriend’s Winter Haven residence that same evening and left just prior to the crash being reported. He later called his girlfriend telling her he wrecked his motorcycle and then told her, “I did not see him,” referring to the person he had hit.
During the interview, she told officers he asked her to pick him up behind Just Move where she saw Kennedy take a broken fairing off the motorcycle, take the tag off and place them both in her car.
Kennedy was located at his Auburndale home and arrested. He was booked into the Polk County Jail for Leaving the Scene of a Crash with Injuries, F3 (F.S.S. 316.027(2)(A); Tampering with Physical Evidence, F3 (F.S.S. 918.13); Knowingly Giving False Info to LEO, M1 (F.S.S. 837.05(1); and Driving While License Suspended/Revoked, M2 (F.S.S. 322.34(2)(A). 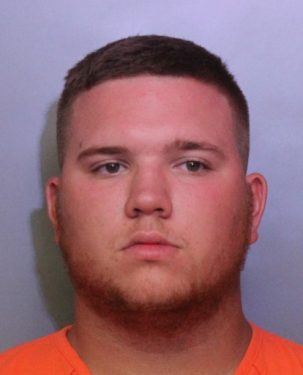