On 8-19-19 at approximately 12:35 p.m., Winter Haven Police officers responded to a call of a man being held at gunpoint by neighbors who saw him throw a brick into a window of a Lake Howard home. (Pursuant to F.S.S. 119.071(2)(j)1 the victim information is exempt)

Thirty-two year-old Brandon Jo Patterson (no known address) was seen by a neighbor walking up to a home located along Lake Howard Dr., NW in Winter Haven. Patterson, who appeared to be incoherent, took off his belt and proceeded to hit the front glass window of the residence. The neighbor, who lives next door to the incident location tried to get Patterson’s attention by banging on his own window to interrupt the attempts to shatter the glass of the neighbor’s residence.

Patterson then turned his attention to the neighbor’s home by picking up a brick paver and hurling it into the glass window shattering the window and putting the resident in fear for his life. The resident retrieved a firearm in the home and when he approached the window, Patterson was walking towards the window. The resident fired one round in the direction of the broken window and where Patterson was approaching in order to prevent him from entering the residence. The shot did not hit Patterson and he was not injured.

At the same time, the resident who lives where Patterson originally attempted to break the window came out of his home and confronted Patterson in the front yard. Both of the residents tackled Patterson and held him on the ground until officers arrived on scene.
Patterson was taken to Winter Haven Hospital to be medically evaluated. 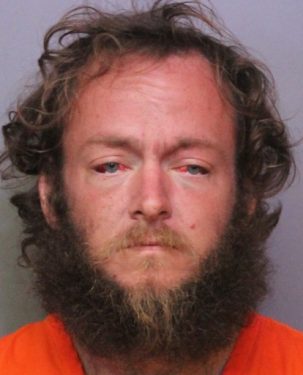