Three officers, on reserve officer, a sergeant promotion and numerous Chief’s Commendations were awarded at a ceremony in July 31 in the Community Room at the Winter Haven Police Department.

Officers Bailey Ovalle, Julie Sutphin and Camille Johnson along with Reserve Officer Dejesus Martinez took the oath to uphold the law and serve the citizens of our community. Sergeant Joshua Dentel was formally promoted to his new rank and new Community Service Officer Matthew Kirkpatrick was introduced.

Chief Charlie Bird presented Chief’s Commendations to the following Police Department and Fire Department members for their outstanding service to our community:

Detectives LaDarious Cooper, Shane Ditty and Rod Esteve followed up numerous threats made to Dennison Middle School at the end of the school year. The caller, a student who was suspended, threated to shoot people at a planned end-of-the-year school dance. The student called three separate times and the detectives did not rest until they were able to locate the origin of the call. Unfortunately the dance was cancelled while the investigation continued, but thankfully nobody was injured and the threats did not play out.

Fire Fighters Ken McDuffie, Matthew Zahara and citizen Gary Montague were awarded Chief’s Commendations for saving the life of a woman who was dining at Andy’s Igloo. She began choking on her food and Gary, who works at the restaurant quickly ran over to the fire station to get the rescuers who ultimately saved the woman’s life.  (additional information here) 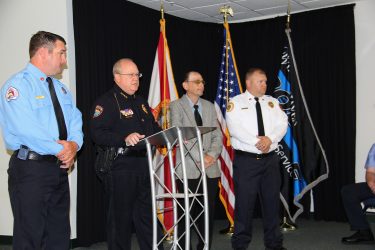 Firefighter Tim Magee received a Chief’s Commendation for his swift actions while fishing in the waters near the Sunshine Skyway Bridge. While in his boat, Magee heard a loud splash and looked to find a man crying out for help who had jumped off the bridge. Magee immediately brought the man into his boat in an attempt to save his life. Unfortunately, the injuries the man sustained from the fall were too severe, but had Magee not jumped into action, it could have been extremely hard for anyone to locate the man.

Finally, Officers Mike Ramierez, Mark Frazier, Sgt. Greg McNally (unable to attend) and Lt. Jose Sanchez received Bureau Commendations from Captain Mitch Meadows for their quick thinking resulting in saving a home from a devastating fire. The officers were on scene at another call when a frantic citizen ran to them telling them on a home on fire and possibly someone inside. The officers quickly made their way into the home (thankfully nobody was inside) and extinguished the flames in the kitchen before firefighters could arrive. Their swift actions saved the home from destruction. 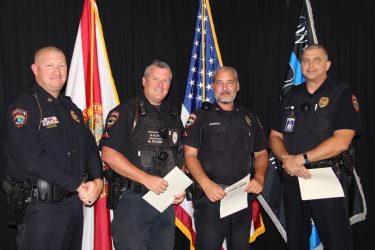