Officer investigating a disturbance finds himself in a roadway where shots were fired in his direction. (The officer did not sustain injuries and we have had no reports of other injuries involving this incident.)

Early Sunday morning at approximately 2:45 a.m., Winter Haven officers responded to a disturbance that reportedly involved individuals with firearms in the 200 block of Ave. P NW in Winter Haven.

As K-9 Officer Luis Garcia turned his agency vehicle onto Ave. P NW, he observed multiple vehicles blocking the roadway and parked just east of 3rd St NW on Ave. P NW, walking to the disturbance location on foot. As he was approaching the crowd of people, he saw several people run south on 3rd St. NW. As Officer Garcia turned the corner where the people had run from, gunshots rang out and Officer Garcia observed 4 – 5 muzzle flashes facing his direction.

As the Nissan traveled north additional officers attempted to stop the vehicle. The Nissan ultimately crashed into some trees on the east side of the roadway becoming airborne at the intersection of Quentin Ave. and Unity Way. At this time, 19 year-old Jamari Osheay Hampton fled from the driver’s side of the vehicle and ran northeast away from the vehicle.

With the assistance from the Polk County Sheriff’s Office Aviation Unit, Hampton was located a short distance away and he was taken into custody without further incident. After making positive identification, it was discovered that Hampton was released from State Prison in December 2019 where he was sentenced to 36 months and is currently on probation.  It should be noted that there was no firearm located inside of the vehicle. The investigation is ongoing to determine the origin of the gunfire at the initial disturbance.

“Our officer faced immediate danger while attempting to protect the public from someone he suspected was firing a gun in the street,” said Public Safety Director/Chief of Police Charlie Bird. “The extraordinary restraint and dedication of all officers involved in catching this guy shows how much the safety of our citizens’ mean to our members.”

Hampton was booked into the Polk County Jail for the following charges: 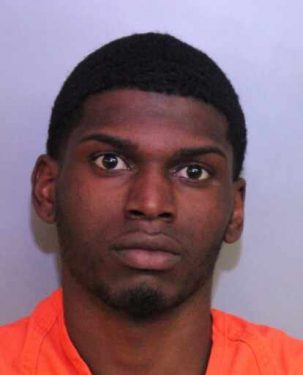