A 14 year-old student at Winter Haven Christian School was taken into custody on Thursday after a firearm and two knives were found inside of his backpack. (Please note that the weapons were inside of a backpack that was located inside of a locker – not in a classroom. No students nor staff members were injured and there was never any threat given by the student to harm anyone.)

On April 4, 2018 at approximately 2 p.m., Winter Haven Police responded to a call regarding a firearm that was found inside of a backpack of a 14 year-old student, identified as Conner Belisle (7th St, Dundee FL). At the time of the call, the school administration had the backpack and weapons secured and the student was isolated with administrators.

When officers arrived, they were directed to the principal’s office where the backpack was located. Inside of the backpack were two knives, (1) butterfly style and (1) SOG brand folding pocket knife. Also found was a Kimel AP-9 semi-automatic pistol with 11 rounds of ammunition.

Belisle told investigators that he recently had been listening to rap music and wanted to bring the gun to feel “powerful” and “cool”. He obtained the gun, which belongs to his father, from his home the night before.

“This should hopefully serve as a warning to any student who thinks it’s cool to carry a weapon, especially on school grounds,” said Chief Charlie Bird. “There is absolutely no room for “cool” when it involves any sort of weapon in a school with the recent events our Country has endured.” 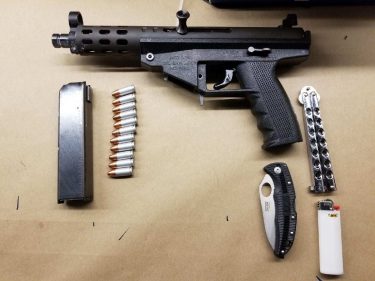