On 11/16/17, members of the Winter Haven Police Department served a warrant on the residents at 2208 Central Ave. W. Detectives started an investigation into the occupants at the home after multiple complaints were received for possible narcotics activity.

Rovira, who has two previous arrests for armed trafficking in methamphetamines, was expected to have weapons inside of the residence. Officers knocked loudly and announced their presence multiple times with no response. Based on the possibility of weapons being inside of the residence, a forceful entry was made with a distraction device being thrown into the home. Initially Rovira ran towards a back bedroom, but he was immediately taken into custody without further incident. Both Biggs and Barrett were apprehended without incident.

A search of the home uncovered more than 2 oz. (64 grams) of methamphetamine and .5 grams of liquid meth, 1.6 grams of cocaine, 57 methylphenidate hydrochloride pills (no prescription), pipes, scales, needles and baggies. Several types of ammo magazines and 368 rounds of rifle, pistol and shotgun ammunition was also found inside of the residence. A total of 15 firearms were recovered to include shotguns, pistols and rifles. At this time, none of the firearms recovered have been identified as stolen. 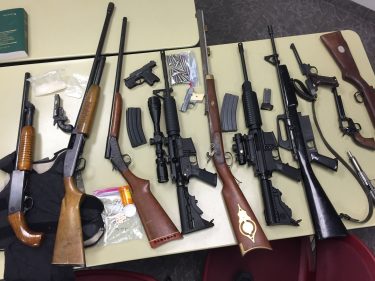 The charges for all three are as follows: