Winter Haven Police responded to the 600 block of 16th St NE on April 28, 2020 at 10:47 a.m. in reference to a man who was walking in the middle of the street with what appeared to be a rifle. As officers arrived, they found 40 year-old George Nerio (Ave Q NW, Winter Haven) in the middle of the roadway with the rifle. His erratic behavior included saluting people as they drove by, walking in a military-style march and handling the gun like it was part of a drill activity. As units arrived on scene, Neiro had the weapon on his shoulder with the barrel pointing in the direction of the officers. Immediately, they commanded Nerio to drop the rifle. He dropped the rifle and put his hands in the air. However, he refused to walk away from the weapon. Residents in the area were told to stay inside of their homes due to Nerio’s unwillingness to obey commands to walk away from the weapon.

Officers and detectives on scene continued to try to convince Nerio to walk away from the rifle, to no avail. K-9 Officer Collazo and his partner Miko set up directly across from where Nerio was standing and at 11:58 a.m., more than an hour after the original call came in, Miko was deployed and took Nerio to the ground. He was taken into custody without further incident and transported to Winter Haven Health for treatment from the dog bite. No weapons were fired and no officers were injured. The rifle that Nerio had is listed as stolen out of the Polk County Sheriff’s Office jurisdiction.

“I am extremely proud of how our officers approached this scenario and ensured every measure was taken for the best outcome, which is getting this guy back behind bars and no officers or members of the public being injured,” said Public Safety Director Charlie Bird. 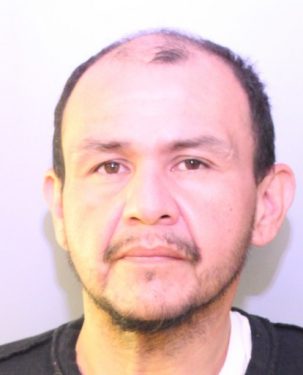